More than football: Franklin and Odessa Permian teams to show act of support in wake of tragedies 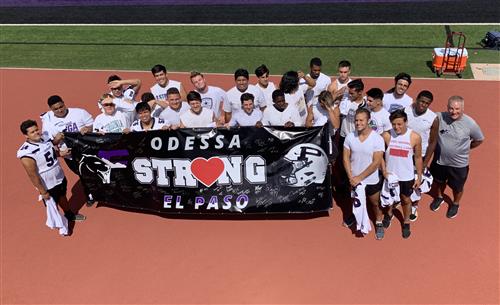 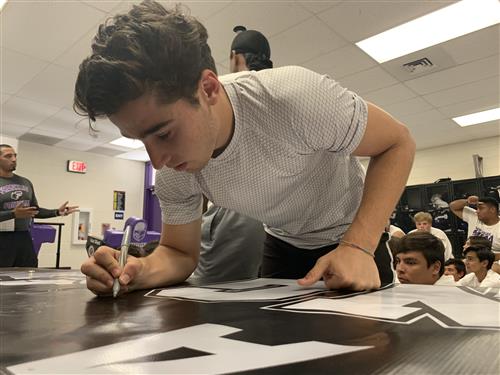 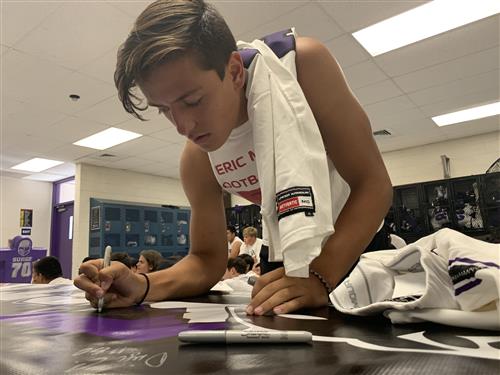 (FRANKLIN HIGH SCHOOL -- Sept. 5, 2019) — The match between the Franklin Cougars and Permian Panthers tonight at Odessa’s Ratliff Stadium will be about much more than just football.

In the wake of the tragedies that struck both communities recently, the two teams plan to unite on the field before kickoff to show support for each other and demonstrate the strength of the two cities coming together during difficult times.

Franklin players on Wednesday rolled out a sign they will present to the Permian team and, one by one signed their name and a message of love and support.  The sign reads “Odessa and El Paso Strong.”

Almost simultaneously, but some 280 miles east, players at Permian — which is still recovering from a mass shooting from last weekend — signed a similar sign they plan to present to El Paso. El Paso was the site of a mass shooting on Aug. 3.

“It’s important that we come together as a community and that they know they aren’t alone,” said senior Ethan Bustillos. “There’s help from other communities and cities to recover.”

The idea for the banner exchange came from an act of support the Franklin team received from the Rio Rancho Cleveland team the Cougars faced last week. At that game, Cleveland players presented a signed banner that read “El Paso Strong” to Franklin captain Andrew Bristol.

“It was kind of a shocker. We’re playing football, which can be a bad blood sport, and it brought more of a bigger picture in my eye. Football is a community … everyone is a part of it,” Bristol said.

“Giving Odessa the banner is going to be meaningful to me because I was the one receiving one last week,” he added. “We know what the Odessa community is going through and we offer our condolences. Hopefully, they hang it as we hung ours from the Cleveland Storm.”

Like Bristol, his teammates were touched by the presentation of the banner. It hangs in the stadium as a reminder that kindness lives on and unites communities.

“It means the world that we can do this for them because when the shooting happened here in El Paso, it brought the community together,” said Franklin corner Michael Buraczyk. “I hope it brings their community together in the same way.”

Quarterback Danny Walther echoed the sentiment of his teammates.

“Last week when we received the banner from Cleveland, it meant a lot to us and we want to do the same for Odessa. We are there to support them.”

Read more about the Franklin v. Permian game from the Associated Press here.