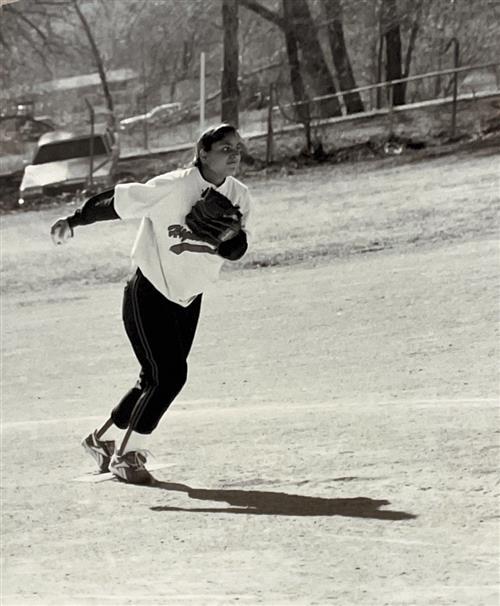 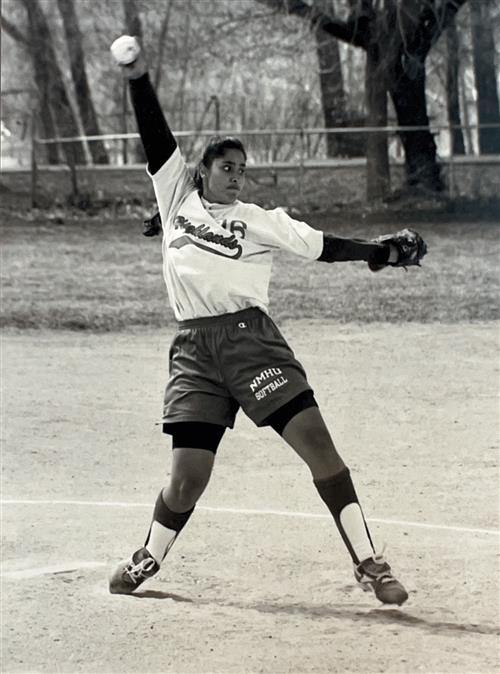 (DON HASKINS PK-8 – Aug. 22, 2022) – Counselor Janice Aguilar-Jaramillo skills on the pitching mound and commitment to her sport earned her a spot in the New Mexico Highlands University’s Athletic Hall of Fame. The NMHU alum will be back at her alma mater in Las Vegas, NM this fall to be recognized for her achievements and contribution to softball.

Aguilar-Jaramillo pitched for NMHU from 1995 to 1998, recording a 44-33 overall record with roughly 500 innings pitched. During her senior year, she led the Rocky Mountain Athletic Conference with 182.6 innings pitched in 34 games and was second in the conference with 17 wins overall. She was named to the 2020 Hall of Fame but has been waiting two years for the induction ceremony because of COVID restrictions in New Mexico.

“I’m honored and humbled for sure,” said Aguilar-Jaramillo. “After so many years, you forget what you did – who you were. Once this came around, I started thinking about how much I loved playing. I lived for playing.”

Aguilar-Jaramillo credits her parents early on for encouraging her and her sister Kathleen Rodriguez to play at a high level. During the summers, the sisters traveled an hour just to practice and it paid off. Both played collegiately and Rodriguez went on to become UTEP’s first softball coach in the early 2000s and now is the coach at Texas A&M Corpus Christi.

“I always wanted to play, and my parents made it happen,” Aguilar-Jaramillo said. “We had every opportunity to continue playing this game if we chose to.”

The 1999 graduate of NMHU started her teaching career in her hometown of Santa Fe before moving to El Paso with her husband Anthony Jaramillo. It made sense for both to join EPISD and coach their respective sports with Rodriguez close by. Aguilar-Jaramillo started as an assistant softball coach at Coronado High and a P.E. coach at Rivera Elementary School before becoming a counselor at Roberts Elementary and then Haskins PK-8.

Jaramillo, who played football at NMHU where they met, is now the offensive line coach at Pebble Hills High School. He’s been her biggest cheerleader along the way, even gathering her stats to share with the Hall of Fame committee.

“He’d been telling me for a lot of years ‘why aren’t you part of the Hall of Fame?’” she said.  “He’s the one who nominated me and did the legwork.”

While Aguilar-Jaramillo no longer plays softball, daughter Ayana, a Brown Middle School student, is now taking on the family tradition. Ayana is a six-year cancer survivor who was diagnosed with acute myeloid leukemia just as Aguilar-Jaramillo was about to become a school counselor. The standout softball player found her experience and lessons on the mound valuable during her daughter’s treatment and on the job.

“It helped keep me focused and engaged in what was going on,” she said. “Pitching has taught me to think on my feet and roll with the punches. Every batter is a new opportunity to start over just as we have new opportunities every day.”

It’s easy to see the spark in Aguilar-Jaramillo’s eye when she reminisces about her days at NMHU. She’ll have even more time to relive those days during the university’s homecoming and induction ceremony in late October.

“Softball has been huge in my life, and it is still part of our lives,” she said. “Being able to watch my daughter now is pretty awesome, too.”