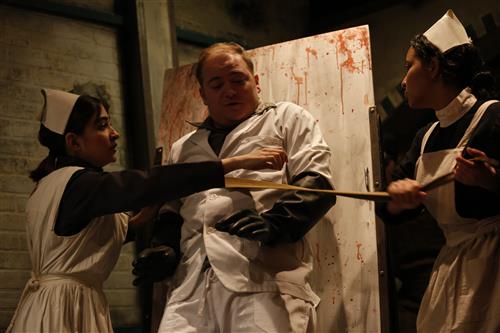 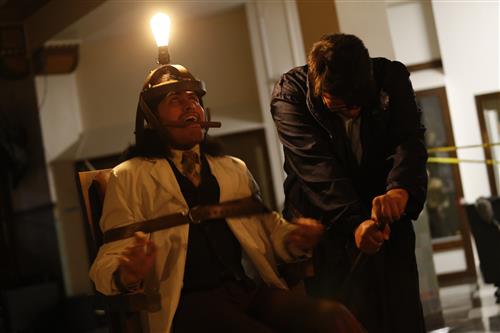 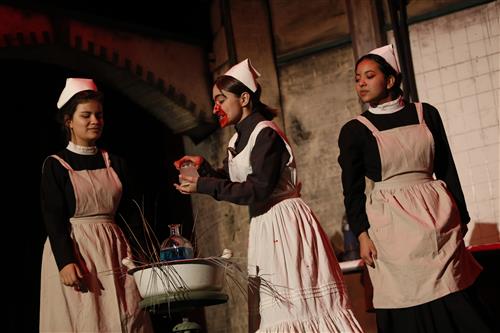 (AUSTIN HIGH SCHOOL -- Oct. 24, 2019) — Austin’s iconic bell tower entrance is the site of an insane asylum where crazed ghouls and psychotic residents recite some of The Bard’s most famous quotes … all with the intent of scaring you.

No, this isn’t an apocalyptic setting. It’s the result of a theatrical collaboration between the Austin High School and the University of Texas at El Paso theater departments.

The two groups have joined forces to create Shakespeare Asylum, a haunted house that mixes set design, costuming and acting to give attendees a truly frightening experience.  The event starts today and runs through Nov. 1.

“It's a Shakespeare mash-up of all of his very famous known stories taking place in an asylum,” said Austin theater director David Alba. “This show’s kind of being treated as a walking haunted tour. You'll see scenes from Macbeth to Hamlet and different areas of the school as a backdrop and of course a lot of theatrics.”

The show actually begins outside on the steps – just below Austin’s iconic bell tower. It continues inside on the stairs and up into the theater.

Jay Stratton, a UTEP assistant professor of performance, approached Alba to collaborate on the project. Stratton had produced similar Shakespeare-themed haunted houses at UTEP but felt the concept would be well suited for high school students.

“It’s pretty tongue and cheek,” Stratton said. “If you would take your kids to a haunted house, you can take your kids to this. There are a few pretty dark moments and it’s all Shakespeare. It’s like a cheap haunted house except that there are lots of beautify language being spoken pretty well by student actors.”

Throughout the process, UTEP actors and tech students worked alongside the high school students – mentoring them and giving them a taste of college-level theater.

“I’ve learned a lot from the actors and the director,” said senior Isaac Woody, who plays Hamlet. “It’s opened my eyes to how theater is at the college level.

It’s been a great learning experience.”

“It has been a great experience because they all know what they're doing. I’ve learned so much from each of them. It makes me want to continue to do theater.”

While the experience gave the Austin students a glimpse into college-level theater, the UTEP students learned what it’s like to teach and mentor high school students.

“It’s just been an eye-opener I think for all realms,” Alba said. “Some of the students that are from UTEP are thinking about becoming high school theater teachers so, it ends up a full circle.”

“Come see it,” Stratton said in character. “It’s going to be scary.”