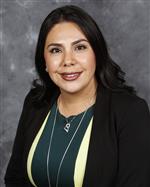 (DR. NIXON ELEMENTARY SCHOOL -- Jan. 11, 2022) — The El Paso Independent School District on Tuesday announced the appointment of Cindy Contreras as the next principal at Dr. Nixon Elementary School in Northeast El Paso. Contreras will return to Nixon after having served as assistant principal at the campus in 2019.

An educator with more than 15 years of experience, Contreras’ career has been spent inside the classroom and in administration both in EPISD and in the Socorro Independent School District. She currently serves EPISD as the coordinator of improvement planning and also is an instructional assistant at the University of Texas at El Paso.

Contreras was principal at Carlos Rivera Elementary School from 2017 to 2019, and also served as assistant principal and summer-school coordinator at several schools in EPISD starting in 2015. Before that she was a classroom teacher at Ituarte and Lujan-Chavez elementary schools, as well as a campus coach at Escontrias Early Childhood Center and Hueco Elementary in Socorro.

She has a bachelor’s degree in interdisciplinary studies with honors and master’s degree in education with honors, both from UTEP. She currently is enrolled in UTEP’s educational leadership and administration doctoral program.