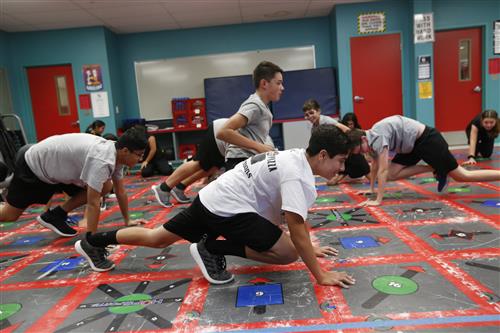 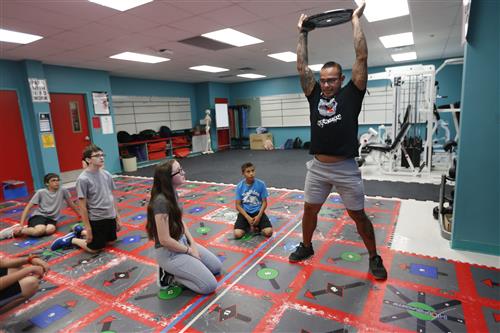 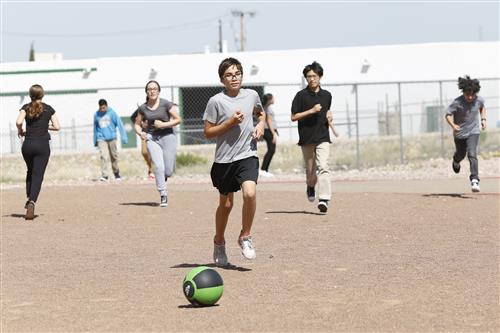 (EL PASO INDEPENDENT SCHOOL DISTRICT -- Sept. 4, 2019) — The Raise Up the Bar program that grew out of Ross Middle School’s popular RossFit after school program expanded this year to classes at Henderson and Brown middle schools.

Coaches at all three campuses hope to see the momentum of Raise Up the Bar, or RUTB, spread even farther throughout EPISD, citing the positive effect it’s had on their campuses and students. RossFit and RUTB coach Bobby Macias beams with pride talking about the expansion of the program.

“Our program unites and strengthens everyone –not only physically, but mentally and emotionally,” Macias said. “It teaches self-discipline and helps kids to become resilient to the stress of school, life and the world in which we live.”

More than 400 students are enrolled in the elective course at Henderson and coach Adrian Herrera sees the program rising in popularity on campus. He already had been working with Macias because both schools share a principal.

“We're actually strengthening the core right now so we're working on squats, push-ups, sit-ups – basic movements because we want to help physical education to improve our fitness scores,” he added. “We’re also trying to get the kids to understand that they can work out without having to go to a gym. They can use bodyweight movements.”

Henderson is building up its gym to support the more challenging movements the class will learn with bumper plates, sleds and barbells.

“I like it because it helps me compete against myself and become more confident,” eighth-grader Angel Granados said. “I believe that I can do more than I have already done.”

Herrera touts the positive energy RUTB generates and how it spills into the classroom.

“I've noticed that kids who were disruptive last year that have joined our class seem to be more motivated for their regular classes,” he said. “When they come here, they burn out all that extra energy and they’re more disciplined and ready to learn.”

Henderson eighth-grader Jasmine Flores sees both the academic and fitness benefit of RUTB.

“I love it,” she said. “It helps me concentrate more in school because it’s showing us discipline and how to focus. I already feel like I’m getting stronger.”

Regan Muñoz, also an eighth-grader at Henderson, hopes the program gets more students off the couch and exercising.

“Our generation has more technology and everyone’s on it 24-7,” she said. “I hope it encourages us to get off our devices and start doing more activities than we usually do.”

Across town at Brown Middle School, teachers and CrossFitters Jordan Sonora and Luis Tapia are leading the RUTB movement at the West Side campus. The program is incorporated into Sonora’s New Tech physical-education class.

“I've seen how people's lives have changed because of exercise,” Sonora said. “I feel like educating kids at an early age about how to take care of themselves and how to enjoy the exercise for the rest of their lives is going to benefit them.”

Sonora, who owned a gym before becoming a teacher in EPISD, always wanted to teach a CrossFit-like program to students. He credits Macias for leading the way to develop this program at Brown and finds students enjoy it because it isn’t like traditional physical education class.

“It’s something new and different for them,” Sonora said. “It changes every single day for the kids. Everything changes from the way I warm them up to the workout we do.”

Some of the Brown students visited Ross in the spring to compete in a community-wide RUTB challenge – making them extra aware of the program.

“It’s fun and good for you,” said Bruce Salas, a Brown eighth-grader who competed in the spring at Ross. “I like working out. Push-ups are my favorite.”

His classmate Elizabeth Roi, a volleyball player, likes the strength and conditioning.

“It’s fun and it gets you fit,” she said. “I’m glad they brought the program here because it helps you get ready for your games.”

Tapia enjoys seeing the progress of students joining in after-school and the marked improvements they made during the program last year.

“Kids are super excited to participate,” he said. “I’ve seen their confidence level from where they start to where they finish. It’s fun to watch. It’s such a well-rounded program to expose our students to,  and helps them to make better decisions health-wise.”

Macias is encouraged by the addition of RUTB at Henderson and Brown and hopes more EPISD campuses join in.

“We are a grass-roots movement started by kids,” Macias said. “When you become one of our campuses, you don't just become part of a network you become part of a family.  I am so happy for the thousands of kids that RUTB is going to strengthen and help positively influence.”

To see more photos of the Raise Up the Bar program at Brown and Henderson, visit the EPISD gallery here.