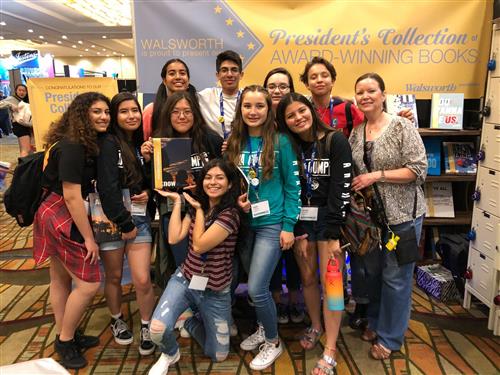 (BURGES HIGH SCHOOL -- May 12, 2020) — Burges’ journalism teacher Pat Monroe, whose publications consistently earn state and national accolades, has been recognized with the highest honor for journalism advisors in Texas – the Max R. Haddick Teacher of the Year.

Monroe is only one of two journalism advisors in El Paso County to receive this prestigious designation from the Interscholastic League Press Conference since it began awarding it in 1962. The virtual announcement was made during a Zoom conference call with journalism advisors from throughout Texas.

“I was extremely happy and honored to receive this award,” Monroe said. “There are so many deserving journalism teachers in the state of Texas. Their commitment to their students is unwavering, and they are all so willing to share their knowledge.”

Monroe credits her campus and parental support for the success of her program.

“I have worked with hundreds of students in my 29 years, all at Burges,” she said. “Many have chosen a journalism or communications professions and are successful. That always makes me smile. I have always believed a journalism education is important. It teaches students all of the life skills they will need, no matter what profession they pursue.”

Monroe would normally be accepting the award at the state conference but Jeanne Acton, journalism director of the UIL, assured Monroe and others on the call that she would be celebrated at next year’s conference. Acton noted that Monroe’s packet had one of the biggest nomination packets she’d ever received in 15 years as director filled with glowing letters of recommendation from students past and present, colleagues, administrators and parents.

“They all adore her and are amazed by her incredible dedication to her students,” Acton said in her presentation. “Pat has advised publications for 29 years and every one of those years has been at Burges High School. That alone is almost unheard of, but in her 29 years, she has amassed thousands of awards. I kid you not. Suffice to say, she and her students have won pretty much every national and state award out there and they win them year after year after year.”

Overall, Burges students and their publications came away with many accolades including the prestigious Gold Star award for their yearbook Hoofbeats, an award they traditionally win year after year. The staff also received 22 individual achievement awards including a Tops in Texas Award for Best Sports Action Photo by Lorely Gonzalez.

“They work so incredibly hard, devoting endless hours to produce a beautiful memory book,” Monroe said.  “I always tell my kids that if they work from the heart, the book will be beautiful and special. They understand that a yearbook is a treasure. After 29 years, it never ceases to amaze me how a yearbook begins with more than 200 blank pages, and eventually students fill each page with images, words and memories that will last a lifetime.”