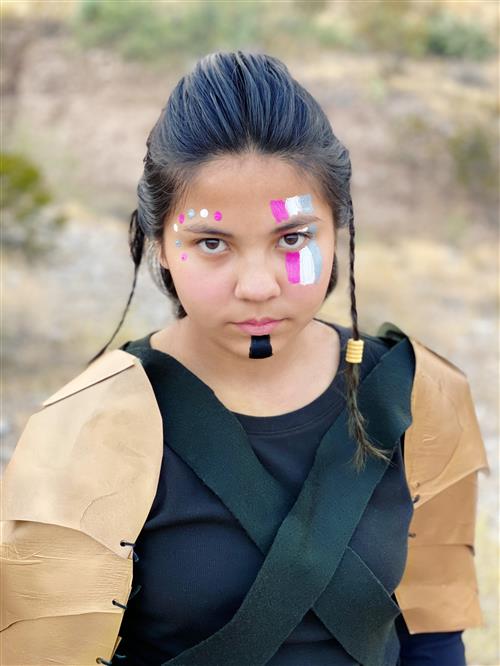 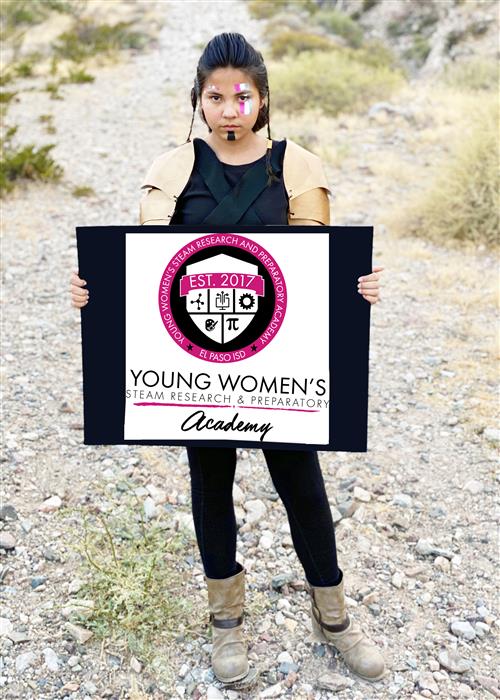 Sophomore Bailey Kukkola is YWA’s ultimate warrior. She wore the costume in a special video showing support for the El Paso Rhino’s winning Hockeyville campaign. The shoot served as the official debut of the mascot.

“I have always been a huge fan of school spirit and I participate whenever there is a spirit week or event,” Bailey said. “When I heard of the opportunity to be our school mascot to represent our school and help with the El Paso Rhinos video, I was so ecstatic and immediately accepted the offer.”

This led to her becoming the 2020-21 mascot for the city’s only all-girls New Tech school.

“I am so honored to be the first mascot for YWA,” Bailey said. “When I wear the costume, it makes me feel proud to be a part of such an amazing school and I want other students to experience the pride and excitement, too.”

As the school grew to include high school students, the YWA team felt it was time for a mascot to represent them.

“With an addition of a mascot it will help us with the traditions,” said campus clerk Naomi Connor, who was instrumental in the mascot launch. “We needed a figure. We needed someone to fire us up.”

The costume – hand made with the help of art teacher Sarai Pagliasotti – is the start of their tradition that they hope to build on.

“We are getting there,” Connor said. “We have to be super creative until we can fundraise for these items. COVID set us back a bit.”

Pagliasotti’s creation was inspired by the garb of amazons, Valkyries and shield maidens who fought during the time of the Vikings.

“They protected themselves in their most vulnerable areas and in the area they used to block hits,” Pagliasotti said. “Other than that, they kept their armor light to flex their advantages – dexterity, strength and speed. They weren't afraid to appear female while proving they can stand and fight alongside their male counterparts.”

The mascot like this leaves room for individual touches, allowing each future warrior to design her own war paint, armor and hair. Heroines such as Wonder Woman, Rey Skywalker, Mulan were among the warriors the students looked to when thinking of how to portray their new mascot.

“The goal is a clan of warriors that shows off all our strengths and diversity,” Pagliasotti said.

“I think it takes a while for a person to be comfortable in their own skin. I love that our campus encourages our students to embrace their individuality while building strength. Even our most quiet and timid students don't shy away from a challenge."

The girls also were involved in naming their mascot and gave her a moniker to honor and recognize their principal, who has led the campus since its inception.

“Our Lady Warrior’s name is Cynthia after our principal, Dr. Cynthia Ontiveros, who supports the dreams of every Warrior student at YWA,” Bailey said. “She is a role model to all of us and we want her name to live on for future generations of YWA students to remember and honor her.”