(EL PASO INDEPENDENT SCHOOL DISTRICT --  Feb. 14, 2022)  — We are falling in love with love this Valentine's Day season. In honor of the day of love and friendship, we are highlighting a few couples who have been struck by cupid's arrow while at EPISD.

Grab your heart-shaped candy and settle in for an EPISD love story. 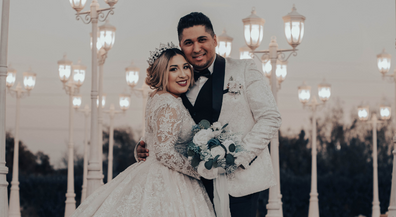 It wasn't until Ray took the stage at Austin High School's "Dancing with the Teachers" that Gloria truly saw him. While they had both walked the same path that led them to teach at Austin, they never interacted more than just a passing glance and smile in the hallway. Ray and Gloria are EPISD graduates (he's a proud Irvin Rocket and she's an Austin Panther). They studied similar degrees at UTEP— he was an English and American Literature major and she majored in Multimedia Journalism — and both kicked off their teaching careers at EPISD schools. Yet, it wasn't until Ray danced to "High Hopes" by Panic! At the Disco with the Austin “Untamed” team that Gloria grew to appreciate him as a dedicated teacher.

Soon after Ray's "Dancing with the Teachers" performance, he was asked to take the stage at the school's version of "TED Talks" to share his journey into teaching.

"I was crying because I had never seen a man be so open with his feelings and not be ashamed of showing his love for his mother in public," Gloria said.

She formally introduced herself following his talk and, after a few more conversations, he finally asked for her number.  Ray was equally impressed by Gloria's work ethic.

"She brought so much energy as a first-year teacher,” he said. “It inspired me to try new things and reaffirm my love for teaching."

Their love for each other grew and almost two years later, with the help of Principal Cyndi Ponce on the last day of school and an empty school gym, Ray performed with the Austin “Untamed” dance team once more –  but this time it ended with him down on one knee.

"It was a beautiful performance, just like the first time I ever saw him,” Gloria said. “I was crying for most of the proposal!"

The Austin Panthers continue to enjoy the enthusiastic support from Ray and Gloria with their Homecoming floats and dripping in black and gold school spirit on Fridays.

“I love that we are both passionate about teaching, we brainstorm together about activities that will be both fun and educational to our students,” Gloria said. “We often go to sporting events to support our Panthers.” 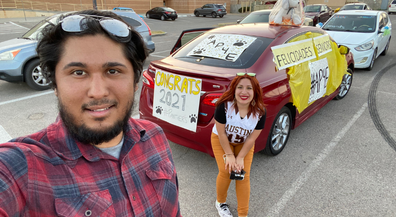 Ray and Gloria love that their roles and responsibilities in their relationship are based on equality.

"No one is better than the other,” Ray said. “We both believe that we can achieve and accomplish with no limits. We each have special abilities that balance each other out while we strive toward greatness together."

Gloria recalls how her mother discouraged the idea of her attending college because she assumed she would stay home after marrying and having children.

"I am happy that I found someone who believes in equality and does not follow those norms. We both work, we both clean, we both cook,” she said. “We see each other as equal."

"We just get each other!" said Ray.

"Be true to yourself! Do not pretend to be someone you are not. There is someone perfect out there for you. Be patient. Love yourself before you love others." 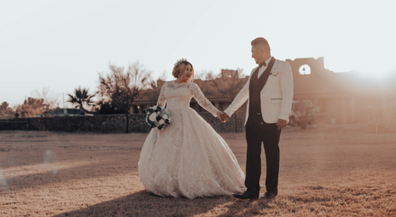