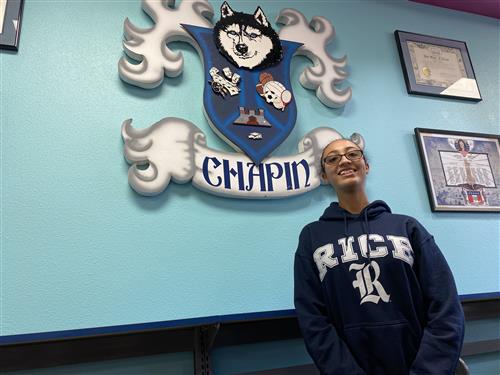 The Chapin senior, who is the top-ranked senior in her class, is one of two EPISD students from the Class of 2020 to receive the scholarship. Laurine Kim from Franklin also received the honor and plans to attend Vassar University in New York this fall.

“I’m so excited. I wouldn’t have been able to attend college without it,” Franklin said.

Kim and Franklin are among only 1,127 seniors to be a QuestBridge National Match recipient nationwide out of more than 15,000 applicants. Franklin’s QuestBridge package to Rice is worth more than $200,000 in tuition, fees, room and board, books and other educational needs over the course of four years. Her original top three choices were Massachusetts Institute of Technology, Stanford University and Yale, but embraces the match with Rice.

“Rice was my dream school my freshman year, but I didn’t think I stood a shot until after QuestBridge,” said Franklin, sporting a Rice sweatshirt. “After QuestBridge, I learned that I can go somewhere like Rice without being in excessive debt.”

As a Pre-Engineering Magnet student, Franklin is already setting her path for double majoring in computer science and data analytics/analysis to become a computer scientist and develop software. But the possibility of joining the NASA program at Rice also has sparked her interest.

“I’d love to do it, so I can say ‘Houston, we have a problem’ legitimately,” she joked.

When not focused on studying for her five Advanced Placement courses, Franklin plays clarinet and oboe in the Chapin band, and participates in a variety of UIL competitions including debate, social studies and computer science.

Franklin is a military-connected student whose father retired from the U.S. Army last year to allow her to complete all four years of high school at Chapin. She admits that she was nervous about moving to the border region when her father was first transferred to Fort Bliss but quickly fell in love with the city.

“El Paso is amazing,” she said. “I didn’t know anything about the culture until I came here. As military students you don’t usually feel like you’re connecting to people, but I found a family here that I could relate to and have fun with on weekends.”