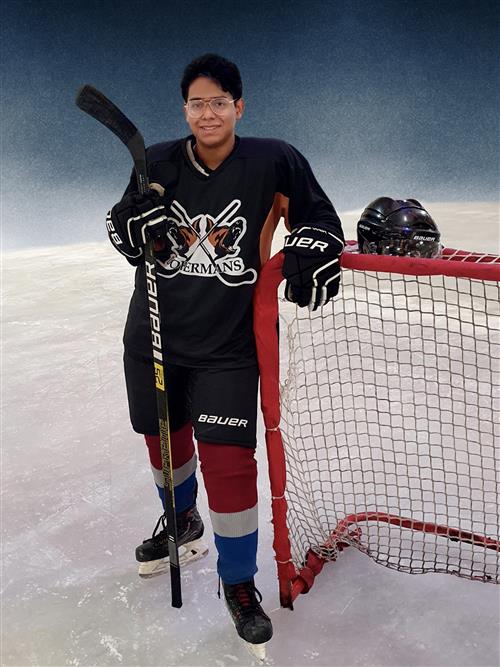 (SILVA HEALTH MAGNET HIGH SCHOOL -- Oct. 26, 2021) — Silva senior Irving Henry Benoit keeps focused on studying pharmacology and his ultimate goal of becoming an anesthesiologist. But when medicine isn’t on his mind, he’s chasing another goal of playing competitive hockey in Mexico. Recently named to the pre-selection team for the men’s Mexican National Hockey squad, Irving shares how he balances school with hockey in this edition of Student Spotlight.

EPISD: Tell us about your passion for playing hockey and how you made the pre-selection team for the men’s Mexican National team.

IRVING HENRY BENOIT: Hockey has been a part of my family and basically grew to know only hockey. While others were watching football it was hockey for me. It has led me to the great opportunity of representing Mexico in the world championships. The Mexican National Team chooses the best Mexican players of the age of 18 and under. To be chosen has been a great honor.

EPISD: How long have you been playing hockey? How did you get started and what is it about the sport that you enjoy most?

IHB: I have been playing hockey since the age of 4 so this would be my 13th year playing. I began playing because of my dad. He was a goalie in high school and wanted me to enjoy the sport as much as he did. Little did he know I would fall in love with the sport. My favorite part of hockey is the friends you make. My two of my best friends both play hockey and I would have never met them if it wasn't for hockey.

EPISD: What position do you play?

IHB: I am a defenseman which means I make sure the opposing team doesn't score. It is a difficult position, but it is a position I excel in.

EPISD: How are you preparing for playing for the preselection team?

IHB: I am currently preparing myself physically by going to the gym, runs, and working out with whatever time I have leftover. I also practice three mornings a week to make sure I stay in top shape.

EPISD: How do you balance school and hockey?

IHB: It is quite difficult to do so. Sometimes one of the two have to give because there just isn't enough time in the day. Sometimes I come home with 2-3 hours of homework and don't have time for practice. But I make sure to put school first and never put anything ahead of it.

EPISD: What activities are you involved in at school?

IHB: I am currently in HOSA but because of hockey and school, I am unable to join more activities.

EPISD: Tell us about being in the pharmacology program at Silva. What made you want to take this career path?

IHB: I am taking the pharmacology program at Silva because of my cousin. She has shown me just how much fun and just how interesting the medical field can be. I chose pharmacology because it will help in my future career choice, anesthesiology.

IHB: I plan to go to either Texas Tech or Texas A&M, and I plan to major in nursing. I want to do everything to help me in medical school so I will also plan on taking a second major in pre-med if possible.

EPISD: What advice would you give an incoming freshman?

IHB: My advice to incoming freshmen is to not lose yourself. School can become hard and everything going on around can be difficult to deal with, but because of that, you have to make sure you don't change who you are. You have to trust yourself and know you'll make it through anything as long as you put your mind to it.

EPISD: What do you look forward to most this school year?

IHB: I look forward to becoming licensed in the pharmacology program and going to prom with someone special to me.

EPISD: What advice would you give to young kids who want to play hockey at a high level?

IHB: I would like to tell them that it is a hard but ridiculously fun sport. I would personally say it is the best sport in the world. You just have to make sure to never give up and to make your goals clear to yourself. Then just work towards them little by little.

IHB: I would like to thank everyone who has been behind me this whole time, my father Henry Benoit, and my mother Neomi Vasquez. They have taught me to be the person I am. They have made me the stubborn person that doesn't give up till he makes his goals a reality. I would also like to thank all of my friends who have helped me stay sane through Silva and those that have helped me become better on the ice. I love you all.