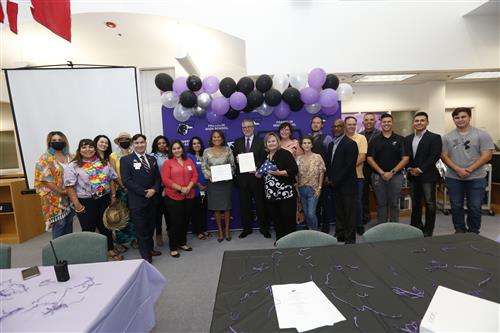 Escobar noted the mark Beach made on the lives of students as she presented him with the flag and read the words entered into the Congressional Record in the House of Representatives on Feb. 8 in recognition of his retirement.

“Mr. Beach is much more than an educator,” Escobar said. “Many of his students have pursued their musical and non-musical aspirations because of his support and guidance. His students learned important life skills like teamwork, responsibility, and dedication.”

Beach spent 36 years in EPISD including 25 at Franklin, eight years at Burges High School, and the remaining years at Ross Middle. He retired last year.

“It’s a huge honor,” he said. “I’m humbled and honored by it and grateful for the people that got involved and put this together.”

Franklin and EPISD administration, former students and a parent joined Escobar in the library for the celebration recognizing Beach for his years of service and legendary style.

“It’s always been my thought that my job is to do more for these kids than teach them music,” Beach said. “I teach them life skills, to be responsible and to be good human beings. It’s important that I teach them more than just notes and rhythms. The music just enhances all of that.”

Among his former students joining in the celebration was Janelle Saad, a 2008 Franklin graduate, who is now the band director at Anthony middle and high schools.

“He was a father figure to us, very nurturing,” Saad said. “He inspired me to be a band director because I want to be a lawyer. But he told me, ‘you have a lot of passion for music. You should go in that direction.’”

Now, the middle and high school band director looks back at her high school years and her mentor, hoping to emulate Beach’s style and leave a similar mark on her students.

“He didn’t necessarily want us to be the best musicians,” she said. “But the best people.”