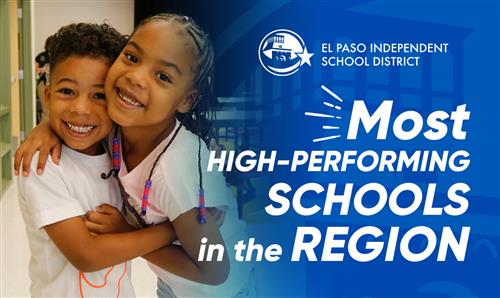 EL PASO, TEXAS — The El Paso Independent School District has the most high-performing schools in the region according to state accountability figures released this week by the Texas Education Agency.

The figures show 60 EPISD campuses earned letter grades of A or B in the latest round of accountability ratings, indicating that students in those schools are scoring better than most of their counterparts throughout west Texas in the academic readiness standards set by the state.

TEA numbers also showed that EPISD improved its overall score by two percentage points to an 88, or a high B.

“EPISD’s unique approach to teaching and learning continues to show unprecedented results,” Superintendent Juan E. Cabrera said. “By offering students active and engaging learning environments, we are meeting their academic needs and helping them develop the collaboration and problem-solving skills they need for life.”

Education experts understand that as the oldest and largest districts in their respective cities, large urban districts historically face challenges that do not exist in suburban districts and districts outside the urban core.

“We are proud that despite declining enrollment, required school closures and a dramatic rebuilding effort following the cheating scandal, the largest district in the county is still on pace with all districts in the region and across the state,” Cabrera said.

Distinctions are awarded to schools based on their performance relative to a group of campuses from throughout the state that have similar student demographics. The distinctions include post-secondary readiness, academic growth, closing performance gaps and student progress in areas like reading and math.

All EPISD schools that had unsatisfactory grades last year improved their ratings to a passing standard this year. Three EPISD schools — two of which are now closed as part of the District’s Rightsizing for the Future Initiative — earned failing scores this school year.

“While overall we are happy with the results throughout EPISD, we recognize that in a small number of schools we have challenges,” Cabrera said. “We are working to identify the best way to address these challenges and we are confident we have created a system that will allow for continued success.”