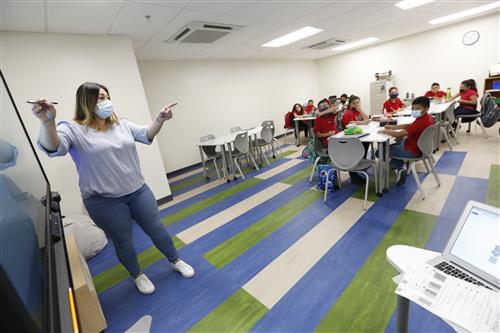 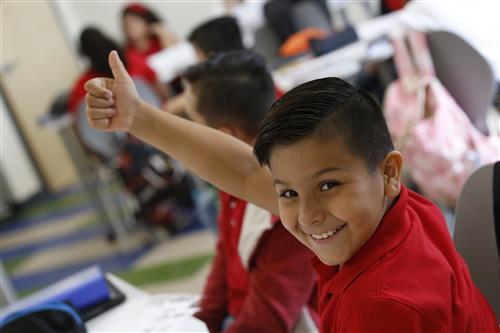 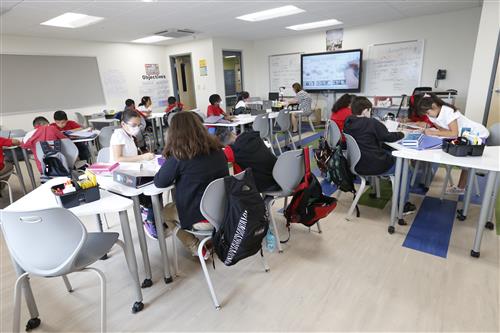 (MACARTHUR PK-8 SCHOOL Aug. 24, 2021) — EPISD on Tuesday celebrated the opening of General Douglas MacArthur PK-8 School, one of the major EPISD Bond projects designed to modernize and rightsize the District.

The ribbon cutting ceremony helped mark the consolidation of the former MacArthur Intermediate and Bonham Elementary schools that took place at the start of this school year after a $18.4 million upgrade to the campus.

Band members and cheerleaders from Burges High School joined with MacArthur’s cheerleaders and choir in welcoming dignitaries to the ceremony at the newly remodeled multi-purpose room.

Some of MacArthur’s tiniest students also joined in the celebration to commemorate upgrades to the school they’ll enjoy for their next 10 years.

“This bond project has been an incredible boost for the Cielo Vista, Burges, MacArthur community,” said Principal Rose Ann Martinez, a MacArthur alumna herself. “This is amazing for me because my family was one of the first in this neighborhood to buy a home. This is a revitalization for our neighborhood. It will help attract young families with kids in it. It will sustain our neighborhood and an EPISD school. So, this is full circle for me.”

MacArthur’s renovations include a new fine-arts addition, updated classrooms, lighting throughout the cafeteria, a new fire suppression system, HVAC upgrades to the gym, a new playground, aesthetic upgrades and replacement of some windows and other minor campus-wide improvements.

One of the highlights of the ceremony was student Sophia Madrid’s a cappella rendition of the Star Spangle Banner. The third grader confidently hit the high notes like a pro and left the crowd in awe.

“I feel excited to sing,” she said. “I’ve already done it before at the Chihuahuas Stadium and at another ceremony.”

Sophia was even more excited about the new amenities at her school.

“I love that it’s really big and I love everything that’s inside of it like the art studio and the music studio,” she said. “Everything seems bigger and better.”

The new fine arts wing also left an impression on Burges’ drum major Jesus Castillo, making him long for his middle school days at MacArthur but with the new amenities.

“The band room looks so big. It looks as big as some of the high school band rooms,” he said. “MacArthur definitely stepped it up this time.”

The updates to MacArthur paved the way to integrate Bonham students into the 60-plus year old school, a landmark of the Cielo Vista neighborhood. The process began last year with parent and teacher meetings to ensure for a smooth transition.

“Our Bonham students year after year become MacArthur ponies and have for the past 60-something years, so the transition isn’t a big leap,” Martinez said. “It’s been a smooth transition.”

EPISD Board President Al Velarde, a former MacArthur Pony himself, said the work at the school is one more step in upgrading EPISD facilities to match the high-quality instruction that is happening inside the classrooms.

“The voters of El Paso supported us in making this historic investment in schools, and we are grateful to be able to deliver on the promise of better learning environments,” he said. “I am excited about the future of EPISD and what’s next to come for these students as they enjoy new, modern facilities.”

EPISD will have another EPISD Bond ribbon cutting ceremony on Friday for the new Coach Archie Duran Elementary School, the consolidation of the former Crosby, Dowell and Schuster elementary schools.