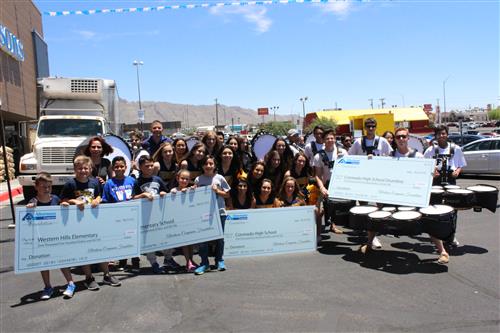 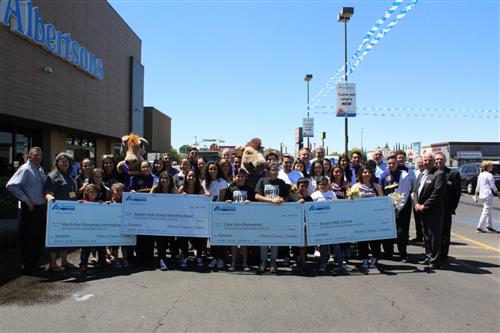 The EPISD Education Foundation’s Partner of the Year – Albertsons – celebrated three re-grand openings May 30 by awarding $16,500 in grants to nine EPISD campuses.

“We are very fortunate here at Albertsons and through the Albertsons Foundations to have the financial resources to pump back into school districts and to really honor these educators that do so much to help students,” spokeswoman Nancy Keane said. “By giving back to them, we hope to make their lives just a little bit easier in the classroom.”

The Burges drumline, cheerleaders and mascots kicked off festivities at the Yarbrough/Montwood store while Coronado’s drumline and cheerleaders led the celebration at the Mesa/Resler store. Albertsons’ corporate leadership and store managers participated in the re-grand openings. The updates to the neighborhood grocery store included more than a facelift but new offerings including sushi bar, expanded deli and Starbucks cafés.

So far, the Albertsons Foundation has awarded more than $70,000 in grants back to its neighborhood schools as it celebrated the new look and updates at seven stores. The EPISD Education Foundation applied for the grants on behalf of the campuses. The Foundation named Albertsons as its Partner of the Year during the EPISD District Address in March.

“We’re proud to partner with Albertsons as they provide grants to our campuses,”

said Russell Wiggs, Foundation board president. “These grants and the school supplies go a long way for our schools as budgets get tighter. At each of these re-grand openings, we see happy principals who are grateful to have Albertsons in their neighborhood, and as a partner in education.”